Plant a tree in memory of Eva
An environmentally-friendly option 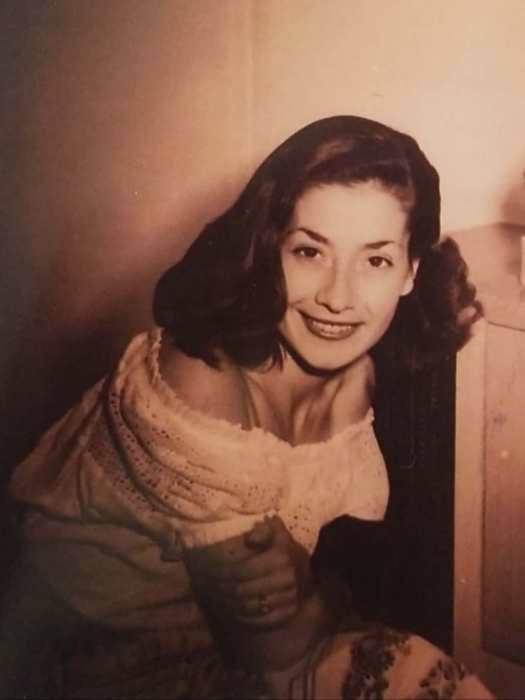 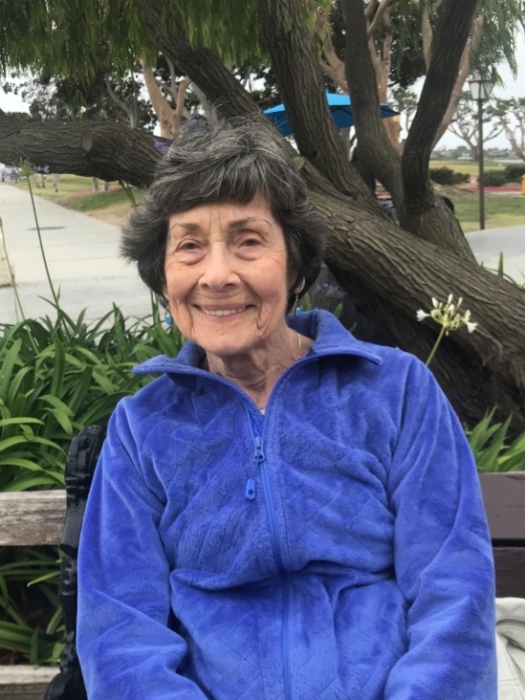 Eva had a wonderful, warm smile.  She lived 95 years and had a full life.  She loved her three children more than anything.  She had lots of energy and was always very active, walking a mile a day at age 93.  .

Eva cherished her friends and they had a lot of fun together.  They traveled, played tennis and Canasta, and attended plays and concerts.  Eva loved tennis, which she started young and played past 93, bicycling, English literature, books, languages, writing, Scrabble, mocha almond fudge ice cream, avocado eggs benedict at Elmer’s, chocolate, and a good cup of coffee.  She was an excellent cook and she made the best cheesecake ever.

Eva suffered tragedies during her life, but was a survivor and a fighter.  She had a very strong will and just kept going forward when things got difficult, making the best of things and always able to laugh.  She worked hard for everything she had and expected a lot of herself.

Eva Maria Teresa Palmegiano was born in Palermo, Sicily on March 26, 1926 to Anna Maria Malvica and Giuseppe Palmegiano.  She had an older sister, Maria Pia.  Eva had happy memories of her childhood in Sicily, especially after her family moved to Trapani, on the west coast of Sicily, when she was about nine.  There, Eva and her cousin Milly had lots of freedom.  Eva loved the water and spent as much time as she could at the beach, swimming, and boating.  She found her passion for tennis, and competed in swimming and roller skating.  Her competitive streak was lifelong; in later years, it came out in tennis, cards, and Scrabble.  Eva’s love of the ocean lasted throughout her life.  She took many trips to Hawaii and Mexico, where she loved the warm water, and went on sailing trips in the San Juan Islands.

In 1940, when Eva was 14, her family moved to Florence when her father, a military officer, was transferred there.  Eva later said that was when the easy-going, good life came to an end.  Eva’s father thought Mussolini was a madman and that Italy declaring war on the Allies was insane.  Eva and her family lived on a hill south of the Arno River, on a street called Viale Michelangelo.  The view of the city from the square at the top of the hill, Piazzale Michelangelo, is beautiful.  On Eva’s many trips back to Italy, she loved going there and to the little church across the street, San Miniato.  Florence was Eva’s favorite city.

Eva said that the first couple of years in Florence were sort of normal, but that things soon got much worse after the Allied troops arrived.  Bombings were routine, although parts of Florence were spared.  During the war years, Eva’s family lost their car, and Eva rode her bike everywhere until it was stolen.  Food was getting scarce, and Eva remembered her mother going out into the countryside to find fresh eggs for her.  Eva graduated high school and, from 1942 to 1944, attended the University of Florence, studying pharmacy.  Eva spoke a little Latin, Greek, German, French, and English, and, after the Allies entered the War, decided on her own to learn more English.  She asked a nun from England who lived next door to teach her.  Eva was always a good student.  She was curious and wanted to learn about everything.

By this time, Eva’s sister Pia had married and lived with her husband, Franco Lancellotti.  The stress of the war took a toll on the health of Eva’s father, and he died on August 25, 1944.  Eva decided she needed to go to work.  However, finding work was hard because, as Eva once wrote, Italy was “in an unbelievable state of disorganization.”  Eva applied for a job with the American forces, who were using hotels in Florence as rest and recuperation centers for the combat troops.  She was hired to work at the Hotel Grand Minerva, which was being used for servicewomen and nurses.  Eva was an “information girl” who provided maps and information to the guests, and sometimes took them on tours of Florence.

In 1944, Eva met an American Army lieutenant, Merlin Michael Mulcahy.  They saw each other whenever he was not fighting on the front in Northern Italy.  After the war in Europe ended, they married in Florence on September 23, 1945.  Eva and Merlin spent 1946 living outside of Naples, a year she described as a good one, full of hope and optimism.  In January 1947, Eva and Merlin moved to the United States.  Eva had a rough trip over on a Liberty ship with many other war brides.

Eva and Merlin lived in Carmel, California, as Merlin was stationed at nearby Fort Ord.  On December 7, 1947, Eva had her first child, Michael Joseph Mulcahy.  Eva, Merlin, and Mike spent two years in Carmel, and then moved to Fort Riley, Kansas and Columbia, South Carolina, as Merlin, by then a captain, was transferred.  In November 1950, when Merlin was sent to Korea to fight in the Korean War, Eva moved to San Antonio, Texas to be near her in-laws, Florence and Colonel Michael Mulcahy.

Eva and Merlin wrote each other almost every day.  Their letters show how much Eva and Merlin loved and missed each other.  They talked about everyday matters, and how pointless the war was; Merlin also described the terrible things he experienced in Korea.  On July 29, 1951, Merlin was killed in action in Korea.

Eva moved back to Italy with Mike.  Eva‘s mother had already died, on October 7, 1951.  While in Italy, Mike became ill, and Eva returned to the U.S. for Mike to be treated in San Antonio.  Eva’s in-laws and Mike’s Aunt Mae were kind and loving to Eva, and Mike soon recovered.

In 1954, Eva met Raymond Millemann, who was serving in the military in San Antonio after obtaining a PhD.  Eva and Ray married in June 1955.  They moved to Rochester, New York, where Ray had obtained a position at the University of Rochester Medical School.  Eva and Ray had two children, Audrey in 1956 and Cliff in 1958.  In 1962, Eva and her family moved to Corvallis, Oregon, where Ray started working as a professor at Oregon State University.

In 1964, Eva and Ray had a house built on a hill in the country, on a road they named Grandview Drive.  Eva loved the house and the trees on the land, and it was her home for 55 years.

In 1967, Eva took her family to Italy for the whole summer.  They traveled all over Italy, spent a month with Eva’s sister Pia and her family on the island of Ischia, loved the gelato, and visited parts of France and Switzerland.  It was a wonderful trip!

Eva always put her kids first.  She drove to the bottom of the hill to pick her kids up from the bus stop so they wouldn’t have to walk the mile up the hill.  She made sure they had things they wanted (like riding lessons and ski tickets).  Eva went back to school, studied hard, and did very well.  She was a lifelong learner.  In 1968, she got a B.A. in English from OSU, and in 1970, an M.A. in English Literature from the University of Oregon, commuting almost daily to Eugene.  Eva started a PhD, but stopped when she got divorced in 1972.  She worked, teaching Italian at OSU, U of O, and two community colleges.  She enjoyed teaching very much, and several of her students became close friends.  Eva’s students and other friends would come over to the house to speak Italian and drink espresso.

In 1978, Eva began working for the Dean of the College of Science at OSU.  She wrote and produced the quarterly alumni newsletter, The Science Record, for which she won several awards.  She thrived on her work, especially because she was able to continue learning.  In 1997, Eva retired.

In 1982, Eva met Rob Gardner, a retired schoolteacher.  Rob shared Eva’s interests in tennis, books, writing, cards, and travel.  They would spend a couple months a year in Palm Springs, and they had many good years together until his death in 1997.  After Rob died, Eva moved to Davis, California to help care for her newborn grandson, Audrey’s son Kian.  Eva lived in Davis for six months, where both Audrey and Cliff lived.

In late 1997, Eva moved back to Corvallis, where she lived until fall 2019.  During those years, she really enjoyed her life.  She took many trips with her kids and their families, going to Hawaii, Mexico, Washington, DC, and Italy.  She travelled with friends to Italy and the East Coast and on lots of day trips.  Eva played countless games of tennis at Timberhill Racquet Club and had close friends there.  She talked to her relatives in Italy and read Italian magazines.  She walked almost every day on her hill or on Bald Hill.  Eva was happiest when she was with her kids and cherished her time with them.  Mike lived nearby and Cliff and Audrey came up to Corvallis or Eva went to see them in Davis.  Eva had fun playing tennis with Cliff, and Scrabble with Mike and Audrey, whom she always beat, and taking day trips to the Oregon coast.  In 2018, Eva, Mike, Cliff, Cliff’s wife Janet, Audrey and Audrey’s partner Kevin took a trip to San Diego.  As always, Eva loved being near the water.

In fall 2019, Eva moved to assisted living at Atria Covell Gardens in Davis to be close to Audrey and Cliff.  Almost every day, Audrey, Cliff, Kevin, or Janet visited Eva or took her out, and she talked with her kids on the phone every day.  She played tennis several times with Cliff and made new friends at Atria.

In December 2019, Eva moved into memory care at Atria.  She had her favorite things with her, including a silver tea service she had bought in Florence in 1952.  She still smiled a lot, and still wanted to make sure her kids were happy.

Mom passed away on April 20, 2021.  We are grateful to the Atria staff, Irene from WeCare4Yolo, and Yolo Hospice for helping us care for her.  She is buried at the Davis Cemetery

Mom is survived by her children, Mike Mulcahy of Corvallis, Audrey Millemann (Kevin Taylor) of Davis, Cliff Millemann (Janet Soule) of Davis, her grandson, Kian Tanner, her cousin Milly in Rome, her cousins Elisa and Germana in Sicily, and other relatives in Italy.

We love you so much, Mom, and miss you always.

Plant a tree in memory of Eva by clicking here.
To send flowers to Eva's family, please visit our floral store.

Plant a tree in memory of Eva
An environmentally-friendly option

Plant a tree in memory of Eva

1 tree planted in memory of Eva

Eva was amazing.  I first met Eva when she was the editor for the OSU Science magazine.  Then I met her on the tennis court  What a competitor.!  Mostly she was upset whenever she made a "mistake"  She was her own worst critic.  I loved playing with her.  Of course, I also enjoyed seeing her at the OSU Symphony concerts.  I'm glad that I had the opportunity to share part of her life.

A Memorial Tree was planted for Eva Millemann

Plant a tree in memory of Eva