Paul Taloff, husband, father, grandfather and deacon, died Wednesday, December 21, 2011, in Woodland, California. Born on February 16, 1920, in Chicago, Illinois, to Meyer Taloff and Fannie Fox Taloff, he was 91 years old. Paul was raised in Chicago, graduating from Sullivan High School. He was attending Northwestern University in 1941, and after the attack on Pearl Harbor, he enlisted in the Navy on December 8. He spent most of his tour of duty as a Corpsman in the South Pacific on the light cruiser U.S.S. Nashville, which carried General MacArthur back to the Philippines. After his discharge in 1947, Paul attended U.C.L.A., where he met and married his college sweetheart, Barbara Ann Nelson. He graduated with a degree in Public Health in 1951, but was summoned back into the Navy for stateside duty during the Korean War. During this time, Paul and Barbara's first child, Kathleen, was born. After his discharge, Paul began working as a registered Sanitarian for the Los Angeles County Public Health Department. He later worked for Placer County, and it was from there that he joined the Department of Environmental Health & Safety at the University of California, Davis. Paul and Barbara have been residents of Davis, California, since 1967. Paul was very active in his professional associations, becoming President of both the California and the National Environmental Health Association. He became Senior Environmental Health Specialist and retired from U.C. Davis in 1982. Paul and Barbara took many trips during these later years, traveling to Europe, Russia and North Africa, and enjoyed Elder Hostels in the United States. Besides his wife and family, Paul had three great loves: his Church, the Navy, and the Chicago Cubs. He was a member of the first class of deacons in the Sacramento Diocese, was ordained in 1981, and spent the remaining years in service to his church, St. James. He loved baseball and said being a Cubs fan really increased your patience. Paul is survived by his wife of 60 years, Barbara; their children: Kathy, Chris (and his wife Betsy), Carolyn (and her husband Steve), John (and his wife Randy) and Michael; seven grandchildren: Mary, Sam, Max, Matt, Grace, Abby, and Katie; step-grandchildren, Lilly and Emily; and nieces, Shirley Ann, Mary Beth and Barbara Jean, and their families. He was preceded in death by his parents, his brother, Joe, and his son, James. A funeral Mass will be celebrated on Wednesday, December 28, 2011, at 11:00 a.m., at St. James Catholic Church, at the corner of 14th and "B" Streets in Davis, California. A reception will follow in the Church Hall. Interment will be at 2:00 p.m. at the Davis Cemetery. In lieu of flowers, the family requests that donations be made in Paul's memory to Yolo Hospice at 1909 Galileo Court, Suite A, Davis, CA 95618.

To plant memorial trees or send flowers to the family in memory of Paul Taloff, please visit our flower store.

What a joy and blessing to know Deacon Paul. He guided us when we decided to marry, presided over the wedding service, and baptized our son Robert a few years later. We will always remember and cherish Deacon Paul's love and bright smile. He is forever in our family members' hearts. - Lisa and Jack Henderson

Paul was a "pioneer" when it came to the restoration of the Permanent Diaconate. He, and his brother deacons in 1981, paved the way for the rest of us and the well over 100 other deacons that serve in the Diocese of Sacramento. His love of his Church, family and community will be long remembered. God rest his soul. Lu Del Gaudio Bishop's Delegate to the Permanent Diaconate

Paul was a very kind, thoughtful deacon and friend. He always had a heartfelt, sincere of greeting folks and reaching out to touch others. He baptized our son, Zachary, and we feel very blessed to have known him.

Dad, I thank God that I was lucky enough to have you for my Dad. I am and always will be proud to be your son. I miss you and love you always. Your son, Chris

You were my all time favorite thing I ever brought to show and tell and my favorite uncle. I hope you and dad have a great time telling stories in heaven.

REST EASY DEAR FRIEND. YOUR SENSE OF HUMOR AND SMILE WILL BE REMEMBERED ALWAYS. 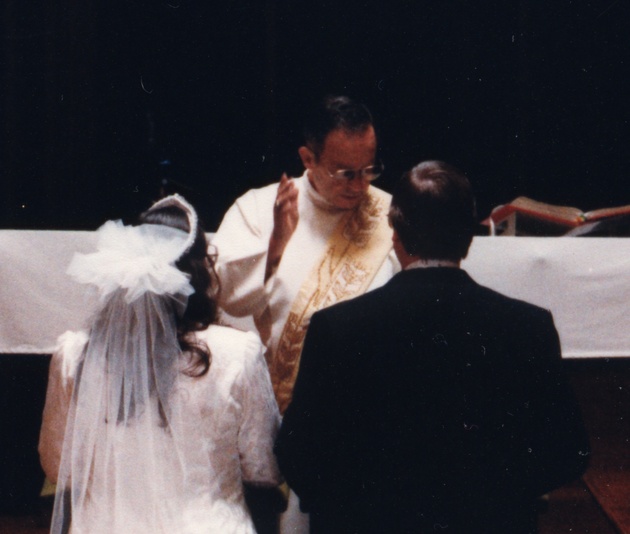